One of my favorite conversations with my students is always when we discuss the geometric definitions of conics. It stems from my middle school teaching years, where I would put a bucket of candy in the middle of room and say "first one to get to it wins!" Inevitably, there was always a riot thrown by students who were sitting in the back and felt they were being treated unfairly.

My challenge to them was always this: "Okay...make it fair."

I would watch them as a class try to negotiate how they should stand. Almost always they would try to stand in a straight line in front of it, until the people at the end complained that they were too far away. Someone would suggest making an oval and eventually they'd maneuver themselves into an almost perfect circle, being sure to chastise anyone who was trying to inch closer than the perfect radius they'd formed. So what's a circle? The set of all points that are an equal distance from a center....or a really valuable bucket of candy.

This idea of identifying the locus of points defined by a certain characteristic carries over in such a beautiful way into conics. I tried something new this year with parabolas (that admittedly I thought of in front of my first period today mid-class) and it seemed to work well and made finding focus and directrix afterwards much easier.

I started by putting down painter's tape in the hallway to form a line and a point (and build some buy in with the kids because who doesn't love a field trip to the hallway?) 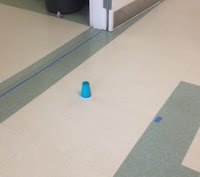 From there I picked a student and asked them to put a cup down at a point that was exactly equidistant from the line and the point. Inevitably, they choose the vertex (which we don't name that....we call it "Jimmy's Point" if Jimmy put the cup down there). Perfect start. 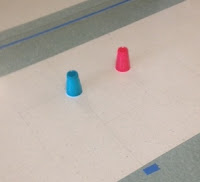 Next, I challenge another student to do the same, without stacking the cup on top of the other. First try is always to put it right next to it. You better believe this stirs an argument in the group. Someone always runs for the meter stick since we can't just count tiles now. We discuss which it's actually closer to and the class gives suggestions to that student of where to re-position it. I continue giving each student a cup and letting the class hash it out until we've started to notice a pattern. 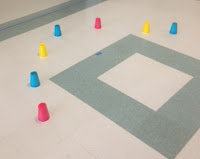 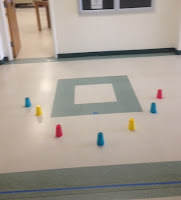 We discussed the idea of the focus and directrix at this point and talk about why Jimmy's cup was so important, finally assigning its proper mathematical name. It gave us a great, hands-on experience to tie our knowledge to the rest of class and I saw a big difference in how comfortable my kids felt finding focus and directrix, even from standard form.

Thinking of turning this into a small group exploration next year where kids can then use the cups to actually do some measuring and explore some traits like focal width or width of the parabola! If anyone has done anything like that before, please feel free to share!
Posted by Mrs. G at 10:17 AM