I have some typical activities that I use when I introduce logarithms (logarithm "war", Kate Nowak's great intro puzzle, laws of logs explorations, etc), but this year I was looking to challenge my kids and get them talking a little bit more. When I taught middle school, I always loved a good clotheslines activity. It made kids look at multiple representations and analyze them, all while interacting and getting some energy out. I decided to try it out this year.

Stage 1: Get Them "Designing"

My juniors were out at the ACT, so I had a class of about 8 sophomores (who are obviously very accelerated in pre-calculus) for 90 minutes that I needed to amuse. As a part of that, I gave them the activity below. In it, I gave them the "answers" and they needed to design logarithm questions to match. They got WAY more into it than I thought they would and it actually turned into a pretty engaging activity on it's own 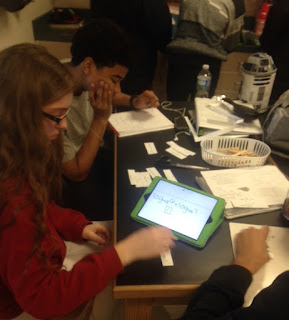 I took the outstanding questions from my sophomores and made them into a sorting activity for the clothesline.

When kids walked in, I had clotheslines up through the center of the classroom, knowing I'd be putting them in small groups to have them work. I handed each group a baggie with the sort cut out and enough clothespins. I then instructed them to work as a group to order them (which was more of a struggle for some groups than others).

What I liked most about this was that they actually had to think about a logarithm having a value- something which is usually a struggle for them. They had to work collaboratively and wound up answering a lot of each other's questions before I could. I always love when kids can answer each other in a different way than I can. I had another activity ready for early finishers, but some of them really engaged in it and took the whole time. 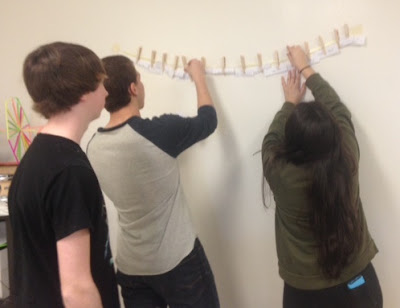 Here was some feedback from the kids. Besides that they wanted candy as a prize and to work with whoever they wanted, they seemed to really enjoy it! 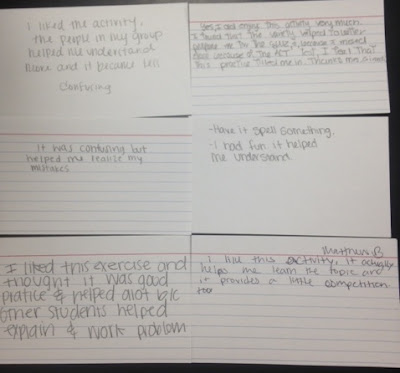