This year, I tweaked the order in which I teach integration a lot. Since we begin to talk about differentials when we talk about linear approximation in the applications of differentiation unit, it seemed natural to me to flow directly into differential equations and indefinite integration. Instead of leading with the area problem, we worked on general antiderivatives and differential equations. Since my students are now familiar with moving between functions and their antiderivatives, I am now starting to move into area applications to introduce definite integrals. They are starting to ask about "going backwards" from acceleration and velocity naturally, instead of having to force the area problem somewhere that it seems unnatural. This will also give me time to re-visit u-substitution since I got to teach it without having to worry about changing bounds in our indefinite integration unit.

For the last 3 years, I've taught in an entirely project based program. The switch back to regular ed has been an interesting one for me, as I can see the ways my pedagogy has changed but don't always have the time, resources, or freedom to implement these changes. I knew when I was given the opportunity to have a 2 hour block for a project instead of giving my AP Calculus kids a midterm that I wanted to jump on the opportunity. I adapted this Gorilla Jump activity from MAA (which is an amazing activity if you've never seen it!) into a project that would require more data collection. It was a real challenge for the kids, but they seemed to walk away with the big idea and were asking the right questions (even if they didn't have all the answers yet).

Students worked in small groups using this Driving Simulator (made on Scratch from MIT) to generate velocity data over even intervals. 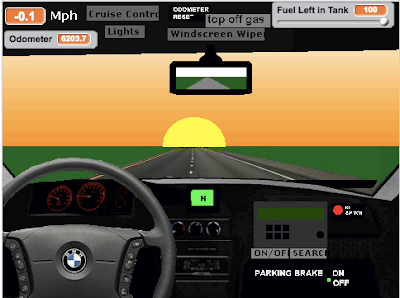 They were free to decide what intervals to use and needed to be mindful of units as most were measuring in seconds while velocity was in miles per hour. This simulator also has weather and varies the time of day, so I had my kids react to these variables so it would affect their velocity. Some drove responsibly at 68 mph on the highway. Some just accelerated as fast as possible the whole time.  I know who to watch out for in the school parking lot now. 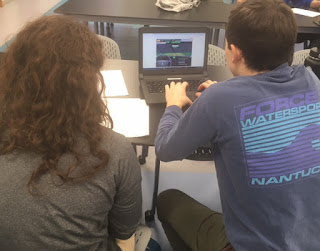 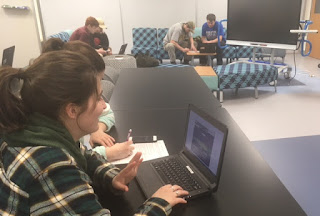 Using that data, students generated estimates for total distance travelled using the lowest velocity on the interval, the highest velocity on the interval, and the average velocity on the interval. They were asked to represent these estimates graphically, which naturally leads to a rough version of a Riemann Sum. In addition, I asked them to challenge themselves to see if they could write an equation (using sigma notation if they were feeling extra fancy) to represent how to generally find the total distance travelled. This was frustrating for the kids, for sure. I used it mostly as a pre-assessment to see what they remember from the previous year on sigma notation. (Verdict: we've got some serious work to do there). They were able to discuss upper and lower bound and postulated that collecting data over smaller intervals would lead to more accurate results. All in all, it led to extremely positive conversations and I think they'll have a very solid foundation when we attach formal names and notation to these ideas next class.

A few notes of things that jumped out at me, having implemented it once:


Let me know what else you might do to make this better. I liked it enough and it was worth doing, but would like to improve it for next year! I'll update with finished products from the kids when I get them!