While working extensively on rates of change, my class ran into the speed bump known as dimensional analysis. For some of my students, it came easily....they have a natural intuition about these types of relationships that makes it much easier for them. For others, it was agony. I was the dentist and they were having their mathematical teeth pulled. No one cares that there are 5,280 feet per mile when google can just tell you the answer, Ms F! Even Bill Nye's new "Solving for X" video was annoying to them....and if BILL NYE can't make it work, who can??

The turning point for all the kiddos came when I posed the following questions to them:

After a heated argument about the pronunciation of "difenwarp" (which, mind you, included them informing me that my pronunciation was wrong despite the fact that I invented the word), even the fast kids started to realize that their intuition wasn't always going to serve them in unfamiliar territory.

I decided to introduce KWL charts to them as a means of gathering information. I always liked the idea of them, but for other subjects....kids want to know about their bodies or wars. Kids are less likely to want to know about combining like terms. Here's a sample of the one I used with them: 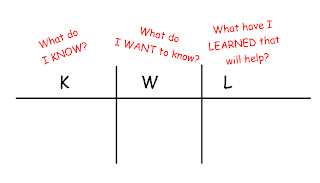 We included what we KNOW...the amount we start out with, what we WANT to know....the units we are aiming at, and anything and everything we've learned at that might help. After a few practice problems, I let them loose. Here were the results! 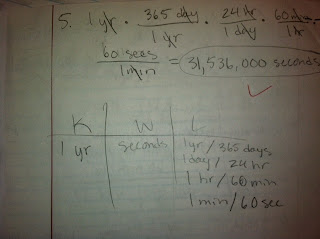 Ohhhh happy day! Seems like most of the resources I could find were high school chemistry labs. I'm thinking next year maybe we bake...they have to convert, they get a delicious baked good as a reward!  Any other good ideas for dimensional analysis?
Posted by Mrs. G at 7:55 AM