Did I Finally Figure Out How to Teach Recursion?

Recursion has always been a weird topic for me- one where I try all sorts of different things to try to get kids to tie the relatively basic conceptual idea to the funky notation that is sometimes associated with it. I've taught it at the middle school level (next=now blah blah blah), in Algebra 1, in Algebra 2, and in Pre-Calculus and I inevitably always have some kids who struggle make the transition from the idea to the notation and requirements. So, yet again, I tried tweaking this year. Here's what I did.

I started by putting this slide on the board: 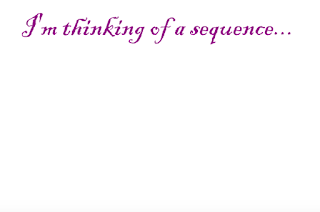 Students had 30 seconds in groups to tell me the exact sequence about which I was thinking....this obviously caused some unrest. Some groups were prepared with random guesses, some got indignant that they didn't have enough information, some argued among themselves about which side to take. I let groups guess and every time I said "WRONG!" until someone finally pointed out that this was rigged.

I let them know that I'd allow the class to ask 2 questions to try to get it right. They needed to prioritize those questions in their groups and then we continued the discussion. The 2 questions they asked:

We discussed- was this strong enough to give me the EXACT sequence I was thinking about? Nope!

That's it! We need to know where to start and how to proceed from there! Those 2 magical ingredients of a recursive formula were just generated by the class- score.

Next, I challenged groups to complete this table together. They had great discussions, challenged each other, and the wait time to try to get them to ask questions at the end was excruciating because they really felt confident about it. 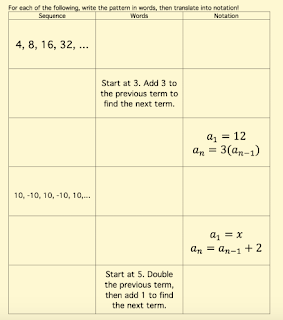 Welp, guess they don't need me now. They just discovered how to write these without me ever teaching it. I'll be in the Math Office drinking my latte with my feet up on my desk.

After some wrap up notes, we played a round of Quiz Quiz Trade- one of my favorite Kagan Strategies. Below are my rules: 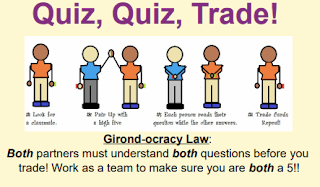 And here's the actual document:

These were small tweaks to how I normally teach recursion, but they made a huge difference for my kiddos this year. The extra work we did with notation previously made a big difference as well (see my last blog post). I loved seeing the kids excited about a topic that has sometimes caused anguish for others in the past!