Extreme Value Theorem (aka Wolf Blitzer's Celebrity Jeopardy Meltdown)
Extreme Value Theorem always seems to fall around election day in my curriculum and the the obvious connection between that and the candidate test are often staring me directly in the face. However, I've found that this analogy often only helps students remember the name of a test- not that actual idea of what it does.

My husband and I are both secretly 87 years old and we watch Wheel of Fortune and Jeopardy every night together. When I was recently reminded of Wolf Blitzer's total meltdown on Celebrity Jeopardy, I had a sudden ah-ha moment:

Mean Value Theorem(aka the E-Z Pass Conspiracy Theory )
Kids love a good conspiracy theory and what better tool to scare a new driver than the prospect of an undeserved speeding ticket. I've posted before about how I introduce Mean Value Theorem, but this year I added a new layer of intrigue. This Snopes Article linked above was written about the area in which I am teaching (Upstate NY) and I remember being a teenager and hearing family members talking about "big brother watching" with all the new technology that was being developed. I may or may not have given my students an article about this to read before showing them that Snopes had verified it wasn't true. They may or may not have freaked out a little. It definitely got them talking about what type of proof they would want a police officer to present to them if they knew that when they were clocked on a radar gun they weren't speeding, but the cop was giving them a ticket anyway.

Rolle's Theorem (just think "Tootsie Roll")
My husband still talks about the day he learned Rolle's Theorem in BC Calc. He can't tell you anything about what it meant, but he remembers that his teacher gave them all dinner rolls. I thought about doing this and was talking at a dinner party one night about where to buy dinner rolls in bulk (because math teachers at a dinner party are notoriously cool). After resigning that I'd need to look like a crazy lady at a wholesale club the next day, someone I barely knew suggested I just buy Tootsie Rolls instead. I had another mini-epiphany:
First Derivative Test- Let's Get Talking
The first derivative test is a pretty intuitive idea when you break it down....a maximum has to happen when slope changes from positive to negative and a minimum has to happen when slope changes from negative to positive. It's something you could talk about at a much lower level than AP Calc. However, it's something we need to be able to justify correctly at the AP level, so the more I can get my students to understand the intuition, the easier this will be for them. I used this activity this year:

I gave out cards like this to my students. 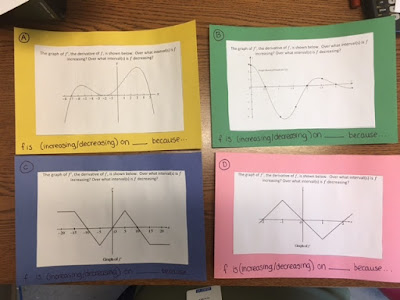 Each one has:
First, I had students work individually on their own problem to make sure they were the "experts" in it. Then, students "speed-dated" students with different problems, trying to determine intervals of increasing and decreasing on each. Then, in small groups, students were asked to identify what happens at the points where the intervals meet. We wrapped up with a whole class discussion to debrief and develop our final conjecture.

We still have a lot more to do in curve sketching, but these are just some of my favorite little tricks for introducing a collection of really fun ideas!