One of the pitfalls of math education is when conceptual understanding is sacrificed for rote skills. I really do believe as a teacher that if kids get the concept, they can apply it much more readily than if they just know how to do some specific skill or memorize steps. And I’ll be honest, I killed it year one with my students' understanding of Mean Value Theorem conceptually. 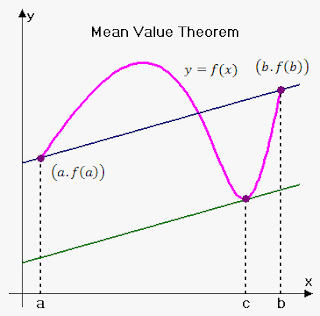 So while we discussed the nature of their mistake each time, I don't think I ever quite gave them enough practice with finding the actual value of c. I'm hoping this activity can help address that.

What Worked?
Introduction:
I introduced MVT using the idea of being given a speeding ticket when an officer never saw you speed. We debated whether it was fair or not as a class (which of course it isn't to a room of teenage drivers) and then talked about under what conditions it would be fair. What kind of proof do they think would hold up in court?

This stems from an idea I read about at Division by Zero. My kids pretty much came up with this exact idea. If they got to some "checkpoint" faster than they should have, it would definitely mean they would have broken the speed limit to get there. In other words, the average rate of change has to equal the instantaneous rate at some point along their drive.

Turns out these devices exist and there are places in the UK where people will actually get speeding tickets for their average speed The image at right demonstrates how these sensors measure speed. Cue the 17 year old's discussion about how "the man" is always watching and they can't do anything without getting in trouble.

Discovery Activity:
Last year I used this MVT Exploration from Key Curriculum Press. I liked that it made the kids examine the criteria for MVT to apply and it led to some great conversations on how this applied back to our speeding situation. It's not an activity that's been optimized to its greatest potential yet, but it provided a good segue from the real world into the theoretical. I'd like to write something that ties more directly to the speeding ticket investigation and transitions more naturally, but we will save that for later in the summer.

What's Changing?
So again, my kids nailed the concept. Really, they got it. But, y'all, they couldn't remember to find "c" to save their lives. When I've used a clothesline activity before (mostly with logarithms, fractions, or function evaluation) it seemed to help my kiddos see that things actually have values associated with them. I'm hoping this might do that same.

I’m thinking this could be a great extra practice or review activity. My class this year was a yearlong 90 minute block so i don’t know that I’ll have time for it in a traditional AP class next year. However, it would be a good station activity or targeted intervention strategy. They really just needed practice and in a way that might require some collaboration and conversation with peers.

Not a post filled with rocket science, but a nice easy transition into summer blogging. Happy last week of school, everyone!